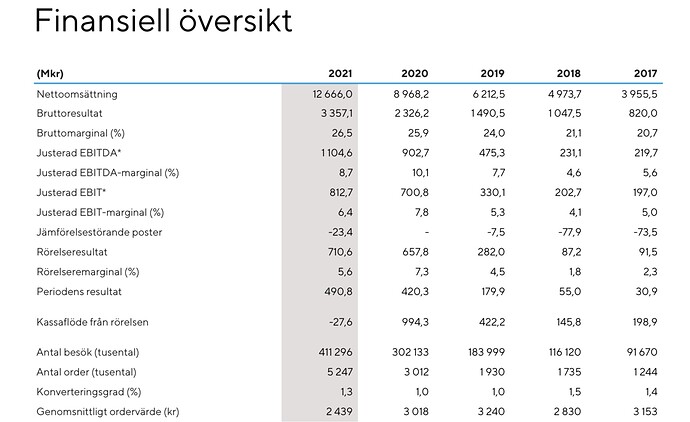 During the third quarter of 2022, the home improvement market – comprising DIY and home furnishings – was characterised by geopolitical turbulence, shrinking disposable income and a certain degree of saturation following the consumption peak during the Covid-19 pandemic, resulting in weaker demand combined with high inventory levels.

BHG Group AB (Publ) (“BHG”) assesses that the business during the third quarter developed stronger than the market as a whole. Net sales in the third quarter increased, despite the challenging market environment, by a total of 1.5% to SEK 3,107 million (3,060), compared with the corresponding period in 2021. Organic growth amounted to -5.3 %. However, order intake during the quarter exceeded net sales by just over SEK 100 million, which is explained by long installation times for certain product groups, primarily in the heat pump segment, where sales are developing very positively as a result of energy price trends. The order intake during the third quarter will be reported as net sales during the fourth quarter of 2022.

The relatively strong net sales performance is mainly explained by positive effects from the ongoing work on refining the customer offering, increased focus on customer needs and optimised marketing activities.

In addition, a number of measures to improve profitability and cash flow is expected to provide a significant boost to the balance sheet:

The Board of Directors has, in addition to the above measures, decided to recognise an impairment loss of SEK 375 million on the value of its inventory as of 30 September 2022. The impairment, which will be charged to earnings for the third quarter of 2022 and mainly pertains to seasonal goods, is due to weaker sales during the summer months of 2022. The impairment does not impact cash flow.

Furthermore, BHG has renegotiated and been granted a temporary relief on certain covenants by its creditor banks. This relief will remain in force from 30 September 2022 up to and including 31 December 2023 and will mean that the creditors’ requirements relating to the leverage ratio and interest cover ratio will be lowered during that time.

“We have tremendous respect for the new reality that consumers find themselves in, and we assess that the market will become even more challenging before it gets better and have therefore chosen to proactively prepare BHG for the uncertainty that is expected to prevail in the consumer market for some time to come. We expect that the measures we are now taking will lead to a positive earnings and cash-flow performance, and constitute a first step in future-proofing BHG for future profitable growth. The previously announced reorganisation and refined operating model are an additional part of these efforts,” says Gustaf Öhrn, acting CEO and Board member of BHG Group.